Our first morning in Hong Kong dawned sunnily but with some ominous dark clouds on the horizon. After a fairly restful night’s sleep I felt pretty much on schedule. I decided to shake off the lethargy of sitting in one place for 16 hours and went to the fitness center to run on an elliptical. It felt good to move all those muscles! I also discovered the wi-fi was good enough to stream DS9 on Netflix while I sweated.

I had the best shower of my life (OK, only shower in two days) and still had time to grab some delicious wok-fried turnip cakes from the complimentary breakfast upstairs. 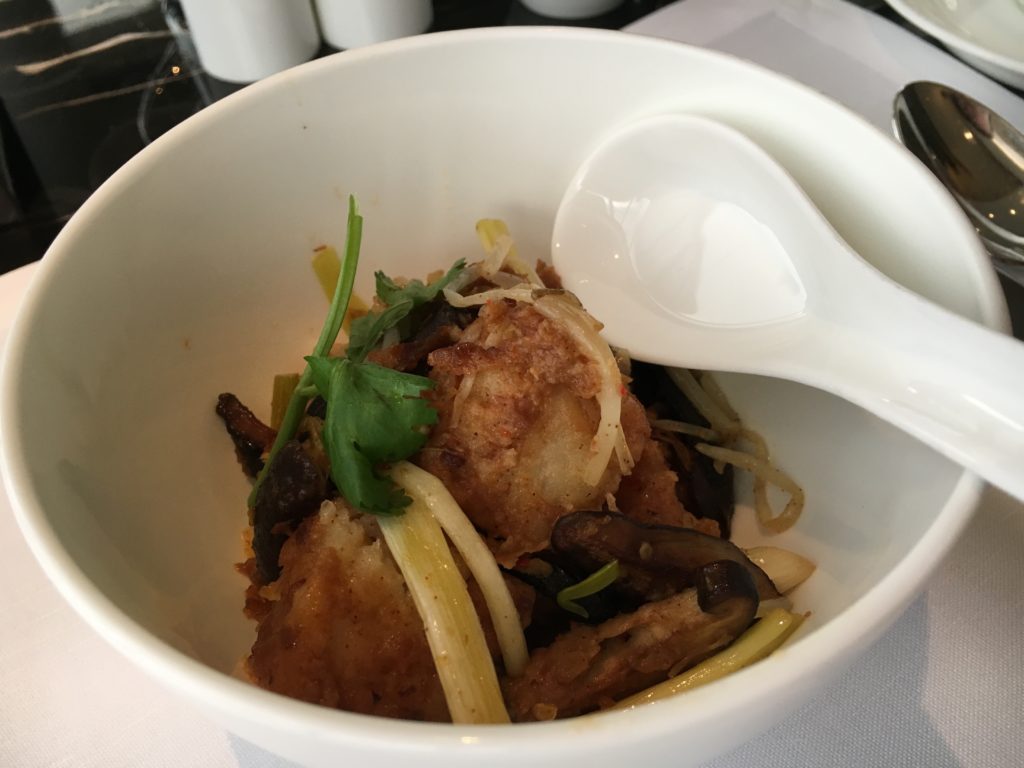 Our first stop in Hong Kong was (drumroll please): Disney.

Our taxi ride out to Hong Kong Disney essentially reversed our ride from the airport the night before. In daylight, it was much easier to appreciate how the islands connect to one another. There are some pretty spectacular city views along the way.

The ominous clouds from the morning did let loose a short deluge, though it was still sunny. That, combined with the heat and humidity, made it feel just like Florida. We weren’t sure how long it would take to find a taxi, so we played it safe and arrived very early for the backstage tour Dad arranged through some unique attractions. 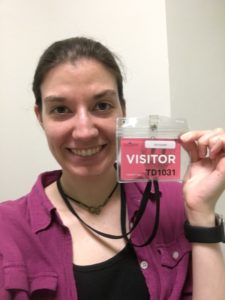 Our guide Todd, was a connection made via the former head of the French AMI outpost, Henry. Even better, we were able to add Glenn Birket to the tour (he arrived on time, being very familiar with the local transit options). Glenn is an old friend of Mom and Dad’s from Epcot days. He’s also my Godfather, though this was really the first time we’ve ever had a chance to get to know one another.

The park seems a bit small compared to other locations, but it is incredibly lush and tropical. Todd was a gracious host and spent several hours with us, walking us through the park and sharing some insider trivia.

Fun fact #1: The park was vastly over-planted, so every time a typhoon comes through and knocks down some trees, they just drag them out and turn them into firewood. They haven’t replanted a single tree since the park opened (and it’s still densely forested).

The park wasn’t crowded, in fact, it seemed rather empty. We thought perhaps it had to do with the threatening clouds and brief downpour, but it turns out…

Fun fact #2: Hellaciously hot September and October are slow months for HK Disney. But although Halloween is not a particularly big event in Hong Kong, it is a huge attendance draw (especially in the evenings and on weekends).

We saw that the park was already decked out with pumpkins, fall leaves, and trick-or-treat stations for the kids. It was also hot. Really, really hot.

Todd kindly lent us umbrellas since it was still drizzling when we arrived. However, by the time we entered the park the sun was out and steaming things up. I finally understand why people use umbrellas for portable shade. They help a surprising amount.

Our first stop was Mystic Manor (an attraction with some similarities to Haunted Mansion). The story follows Lord Henry Mystic and his pet monkey, Albert. Their story ties into the Society of Explorers and Adventurers from Tokyo DisneySea. Todd pointed out the real life designers, engineers, and composer who were featured in the pre-show “sketches” chronicling Lord Mystic and Albert’s adventures.

The ride starts when Albert opens their latest treasure: a music box. Legend says the box can bring inanimate objects to life, which of course it does, to disastrous results.

The ride vehicles are trackless, meaning they can go all over a room, including in circles, over and over again. This leads to a very interesting ride experience where your attention is sharply focused on particular elements at particular times. The show was cute and made excellent use of the ride vehicle’s capabilities.

We ate lunch at the attached restaurant, which served Korean, Indonesian, Japanese, and Cantonese dishes. Dad and I opted for the Indonesian vegetable curry. It was decent (by theme park food standards), but the roti were a bit indestructible. I did enjoy my watermelon juice (which would be called a watermelon fresca in the states).

After lunch, we continued our tour of the park, including a brief stop at an optical illusion that managed to make Mom look taller than me. That’s quite a feat of forced perspective! 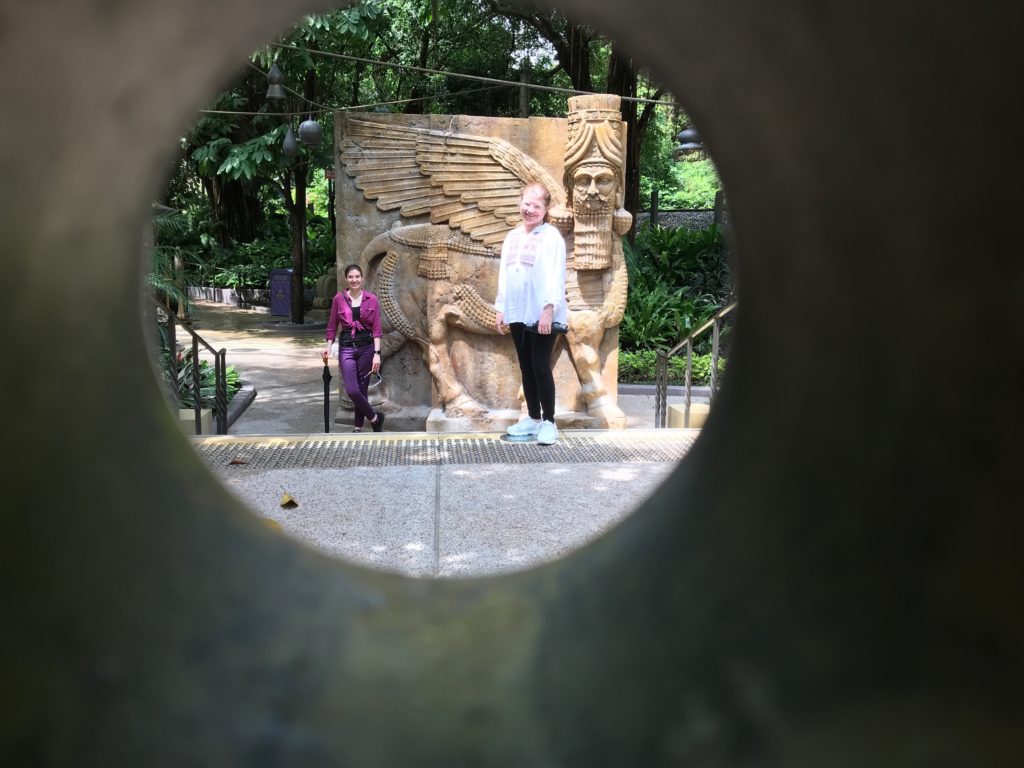 This isn’t something you see every day!

Next, we strolled through the Toy Story. My favorite part was the cleverly understated Tower of Terror pun. 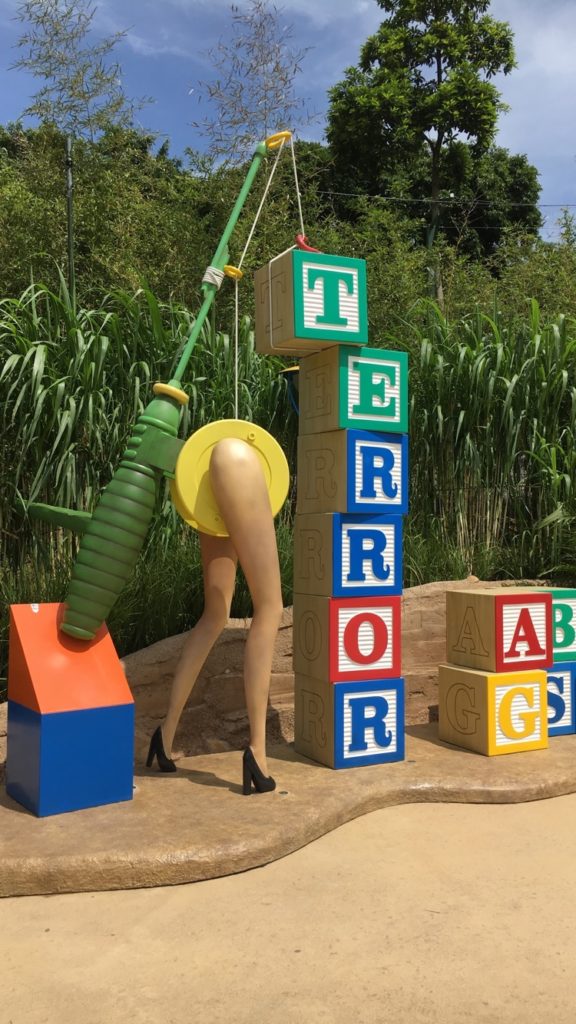 Our final stop was the Iron Man simulator ride. The pre-show would be good for hard core Marvel fans because there are some cool movie props on display. Stan Lee also makes a cameo appearance in the safety video (which ran twice, once in Cantonese, once in English). Unfortunately, Stan Lee’s cameo distracted from important information both times!

The story is a bit thin for the 3D simulator. Like with all simulators, you’re there to watch a demonstration, something goes wrong (bad guys want to steal Tony Stark’s new arc reactor) and you have to help stop them and save the world (Hong Kong at least).

Mom and Dad got more of a kick out of the equipment room we visited after riding.

We elected not to stay in the park. Instead, we headed out with Glenn, who is very familiar with Hong Kong, so he could show us the ropes.

He showed us how to take the MTR, a train system that feels like a CTA-tube hybrid. It’s very convenient and reasonably easy to navigate (once you know the ropes). 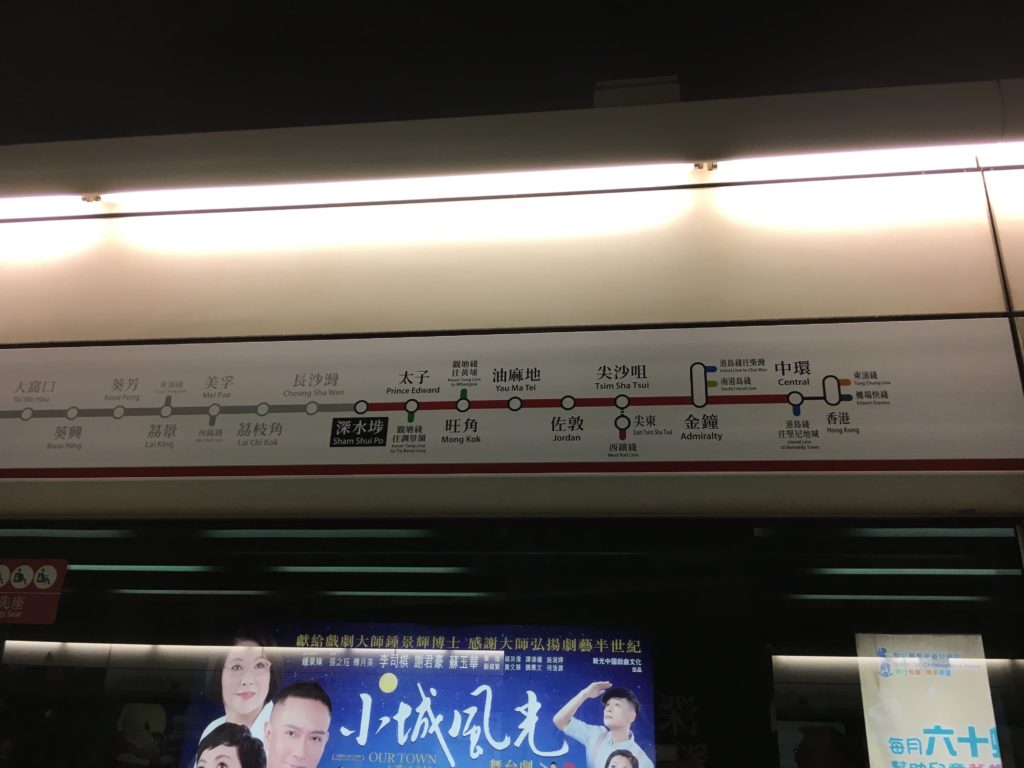 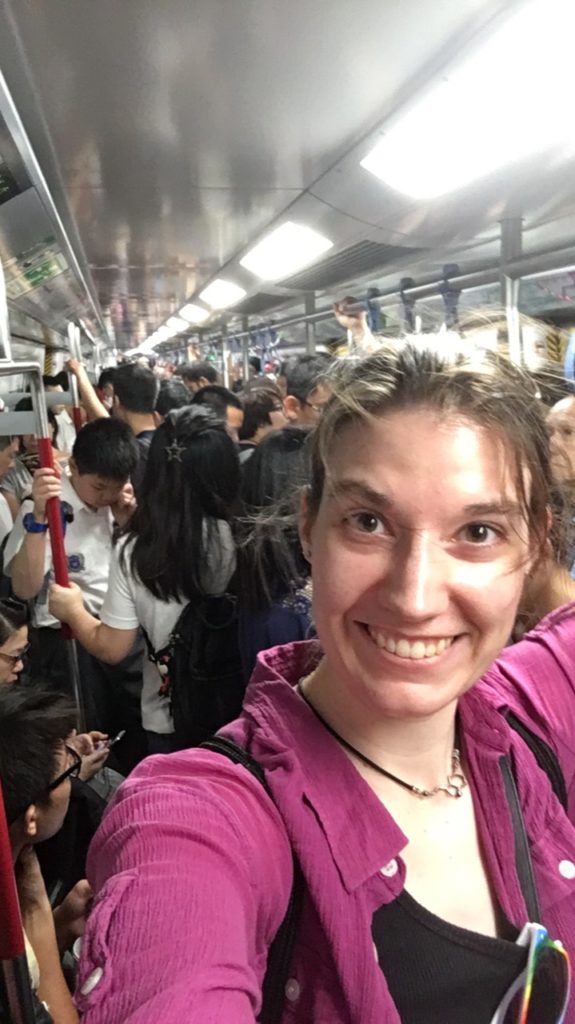 The train just a little before rush hour

We stopped briefly at Glenn’s office so he could introduce Dad to a few folks. 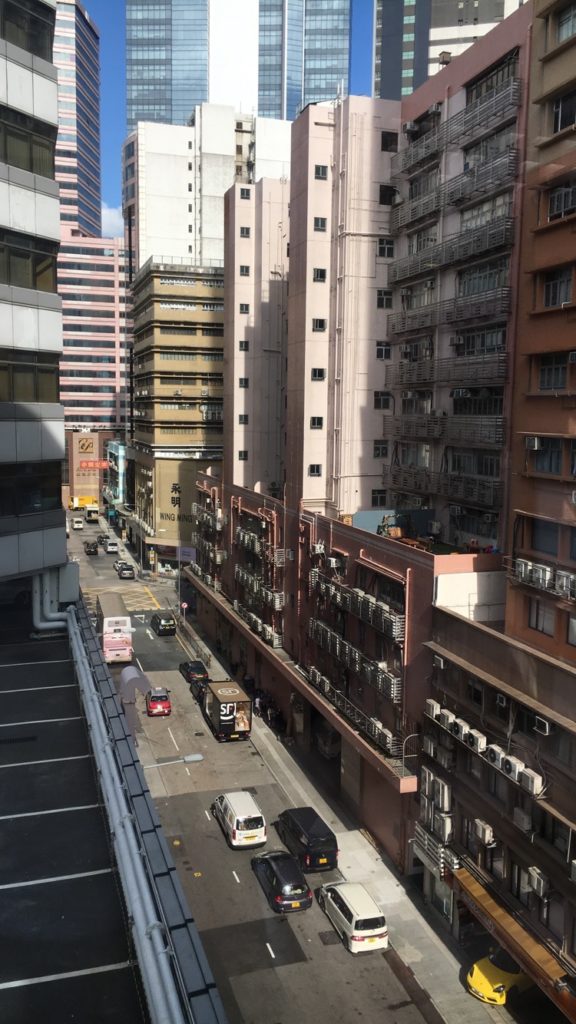 Then, we went on a mission to obtain a specific selfie-stick and micro-SD card for Dad. This involved a visit to Sham Shui Po, a district with a vast collection of merchants selling any electronic gadget, piece, or gizmo you could ever want. There’s an outdoor market, but we opted for the four story indoor (and more importantly air-conditioned) option. 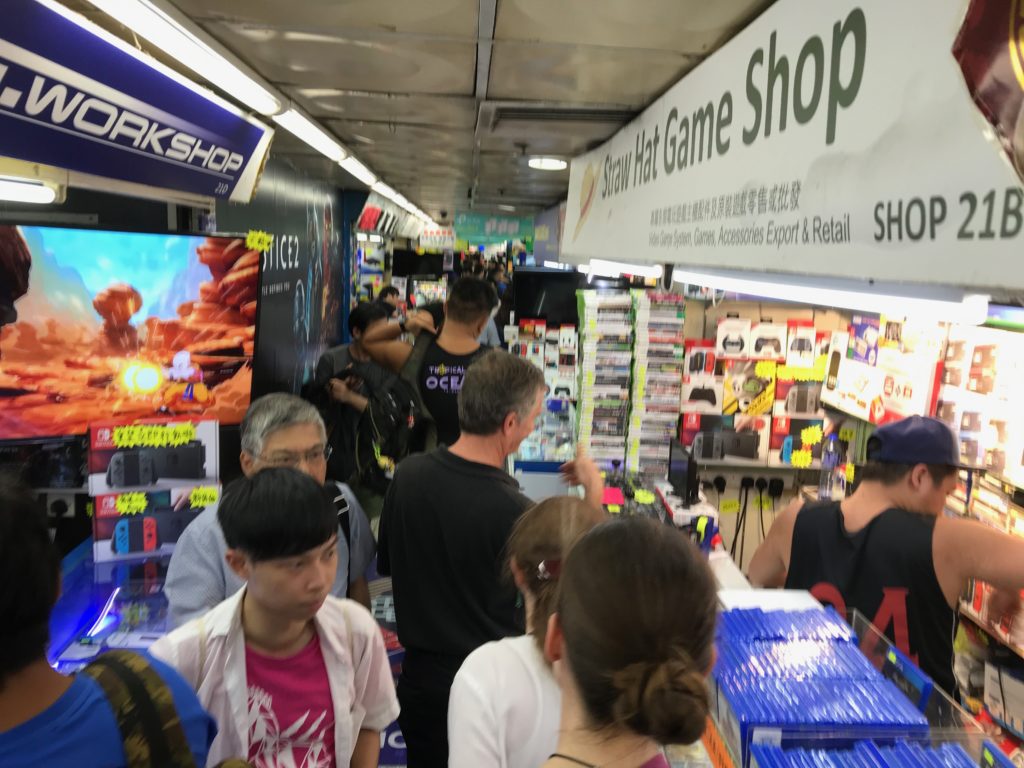 I hope there’s never a fire in this building…

Dad found both items fairly quickly though the sheer amount of stuff (and people) packed into the teeny tiny hallways was incredible. The experience reminded us a bit of Akihabara, the electronics district in Tokyo.

Mission completed, we hopped back on the train and headed to Kowloon (the island to the north of Hong Kong island). We walked down Nathan Ave (a shopping street) and past the famous Peninsula Hotel (sadly, we did not stop for tea).

We made it all the way to the tip of Kowloon and walked along the Tsim Sha Tsui Promenade, which is directly across the water from our hotel. The view of Hong Kong island was stunning.

Panorama from the promenade 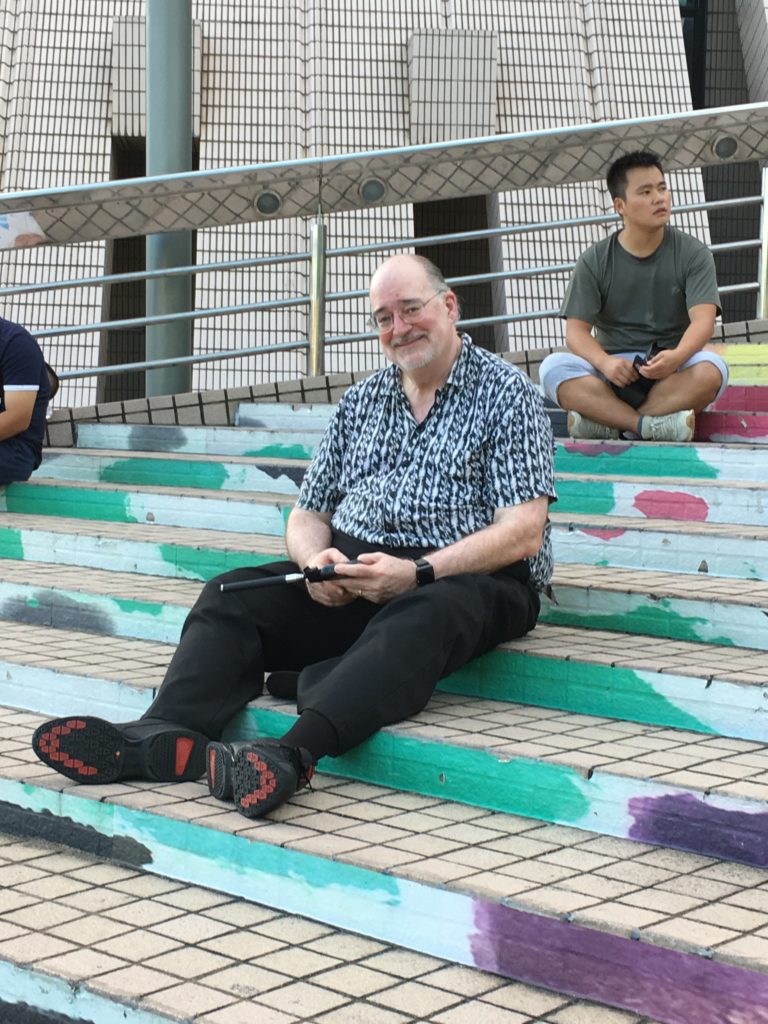 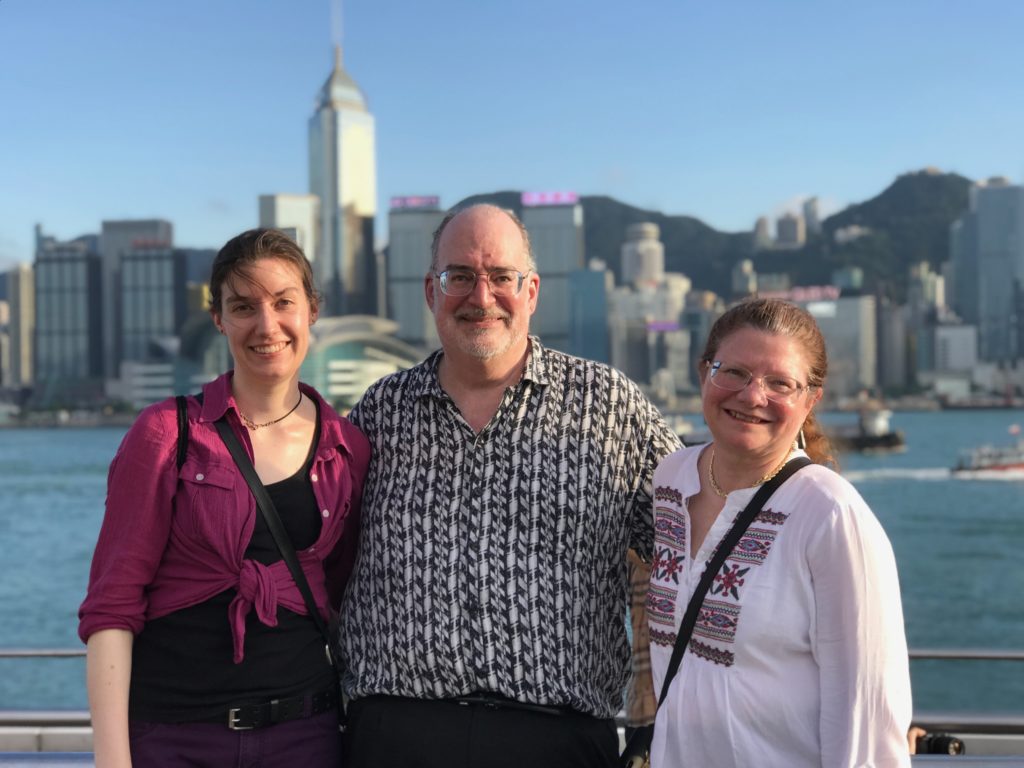 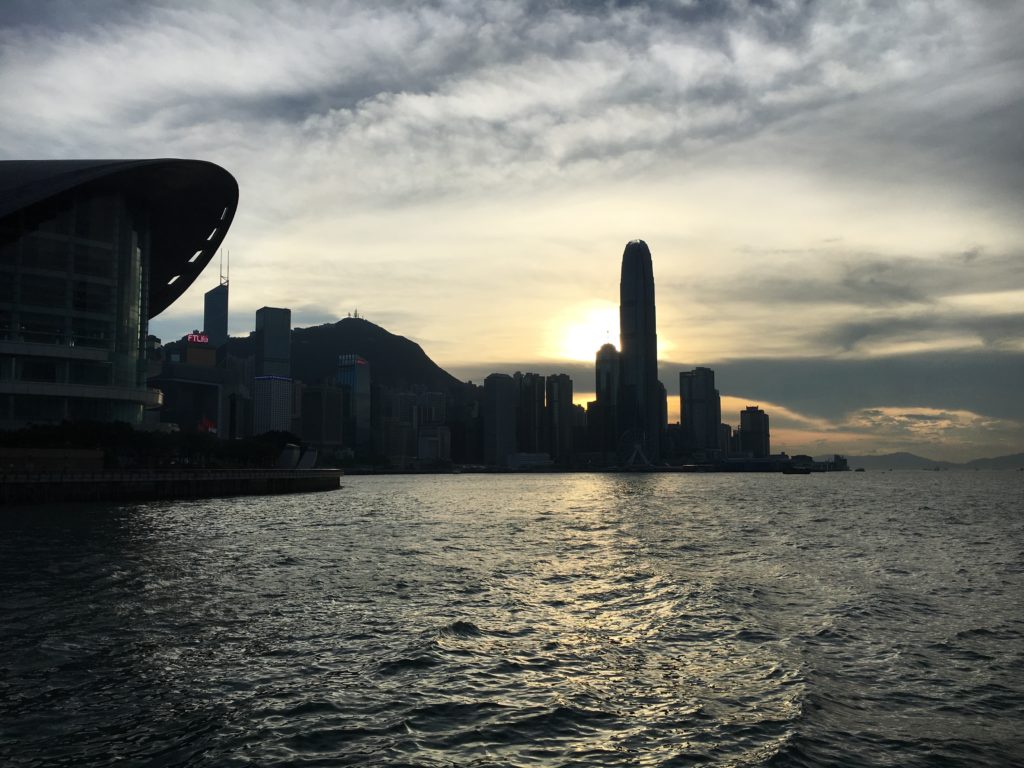 We took the famous Star Ferry across the water to the convention center attached to our hotel. The sun was setting as we sailed across, and it made a striking back drop for the skyline. 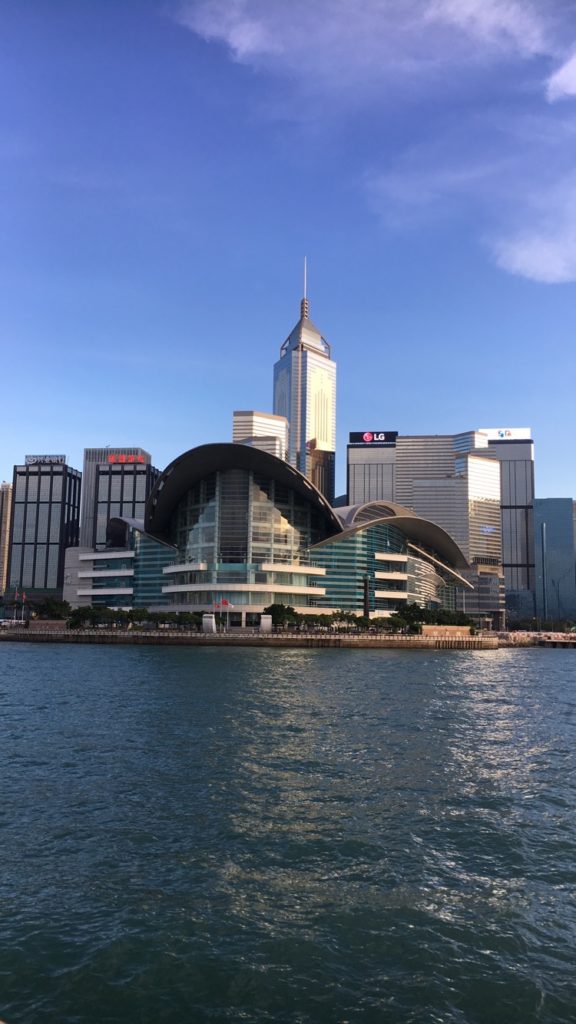 We relaxed at the hotel for a bit before going to the Japanese restaurant in the hotel for dinner. We had a nice dinner, which included a delicious lotus root and sesame oil amuse bouche, crab and seaweed salad, some kind of broth with a dumpling, 5 pieces of sashimi, wagyu, tempura, and a mini matcha bunt cake for dessert. 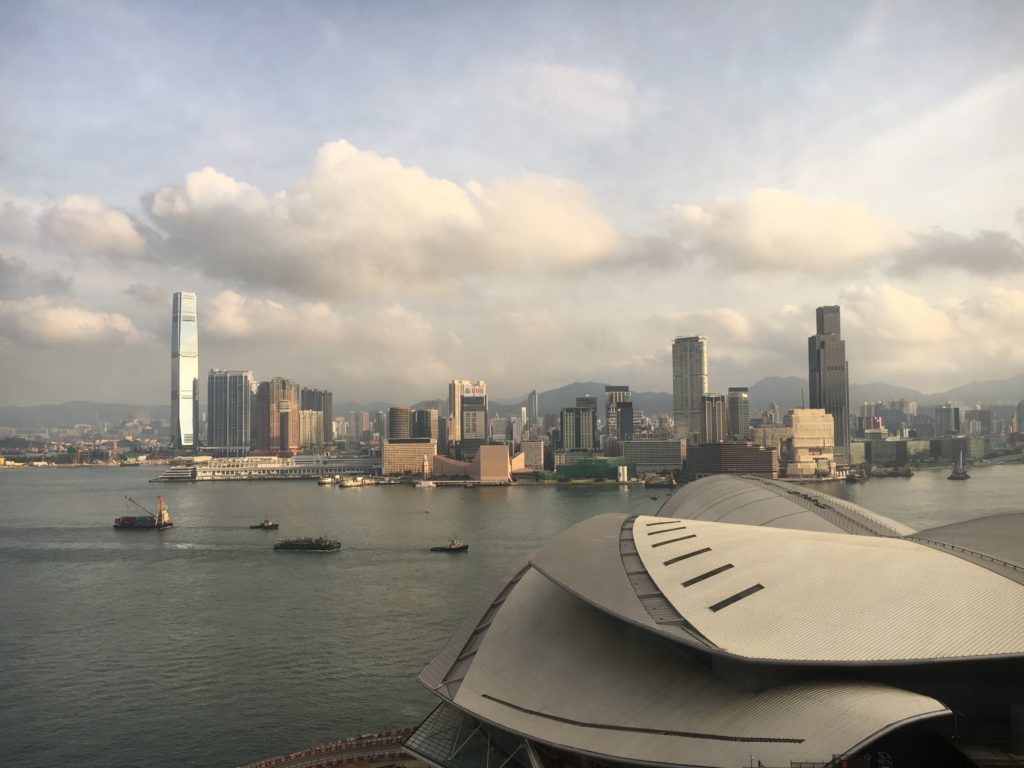 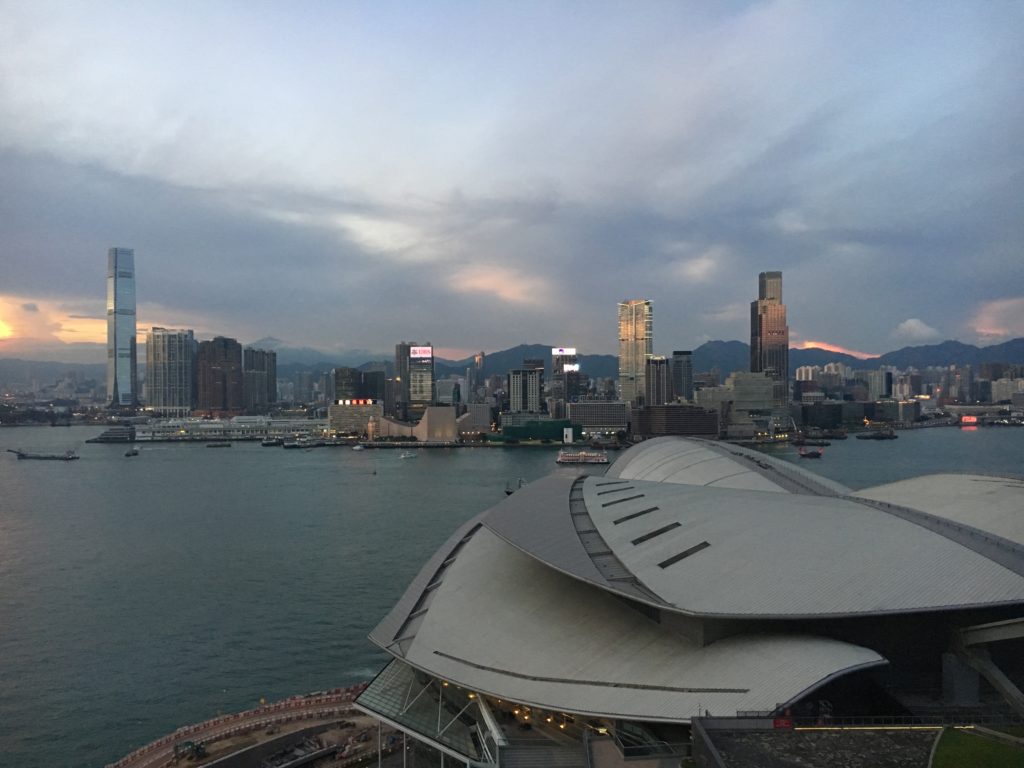 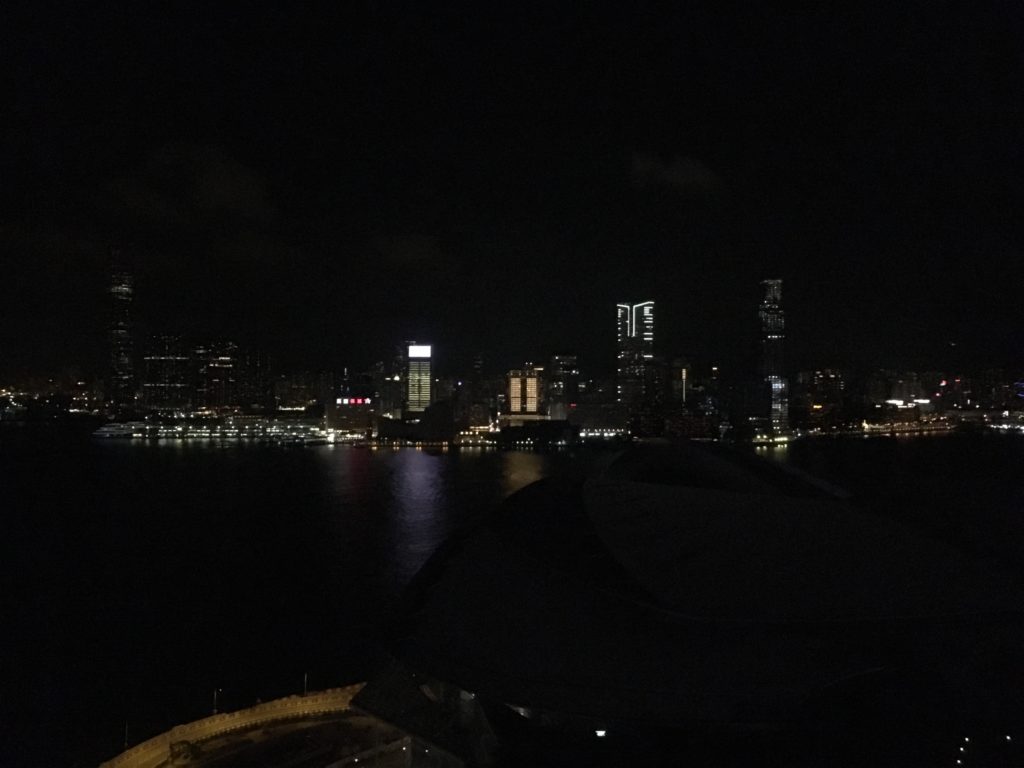 Check out my snap story for the day: https://youtu.be/EE9xv3_Ea4A