When the Cubs Won the World Series

Intellectually, I wanted the Cubs to win the World Series.

Though it would have been better in 2015 as predicted by Back to the Future, I figured better late than never. But over the past seven days I saw an entire city come together to witness a piece of history. And I was there for it. The way I felt at 11:47pm on Wednesday November 2nd was so much more than intellectual.

Prior to Saturday October 29th 2016, the sum total of my knowledge about baseball amounted to three strikes and you’re out, remembering about 80% of the lyrics to “Take Me Out to the Ball Game,” and whatever I gleaned from a tour of the Louisville Slugger factory last summer.

My girlfriend and I tuned into the Saturday night game somewhere around the fourth inning and proceeded to watch us get slaughtered by the Indians’ superior pitching. Even I could tell we were falling apart at the seams. But I paid attention, started figuring out the rules, and listened to my girlfriend’s commentary about the players (which was so much more informative that Joe Buck’s).

I figured we were doomed.

That night, I had a couple friends over to carve pumpkins and watch the game. I was shocked to realize I actually cared if we won. And it was an exciting game. The Cubs upped their game significantly and played as a team. But the Indians were at the top of their form too. It was a nail biter. 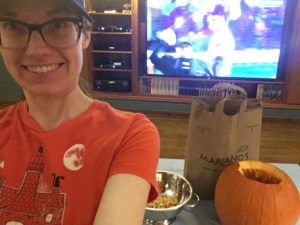 Carving pumpkins during the Cubs game

When the game ended with the Cubs victorious and headed back to Cleveland, still in the running, we cheered.

Monday and Tuesday I saw people wearing Cubs gear all over the city. There was a real feeling of collective excitement. There was this thing, this potential piece of history, binding Chicagoans together.

I agreed to meet my girlfriend at Harry Caray’s Seventh Inning Stretch, a Cubs themed restaurant in Water Tower Place, to watch the sixth game of the World Series. In my Uber there, the driver asked in a thick Russian accent if we could listen to the first inning on the radio. I said of course. I realized that over the last two games I’d learned enough baseball terminology that I was actually following the game. As we cruised down Lakeshore Drive we listened to Kris Bryant hit a home run in the top of the first and we cheered together.

At the restaurant, we scored a table nestled in amongst other Cubs fans, young and old. We cheered and groaned together, heckled the Indians players, and high fived after Addison Russell’s grand slam.

The game was magic. The Cubs were on fire, and though we all knew they couldn’t hear us cheering states away, we did it anyway. At the end of the night, screw the odds, we’d made it to game seven of the World Series.

The next night, it felt like the entire city was out to watch the game. My girlfriend and I tried to return to Harry Caray’s but it was booked up, and the next three places we tried couldn’t seat us either. But the magic continued, because we saw Fowler’s home run through the window of a restaurant we considered.

Finally, we spotted an Italian joint that didn’t seem completely packed. We ended up with a table right away and watched the game unfold, surrounded mostly by large, multi-generational families, all rooting for the Cubs. 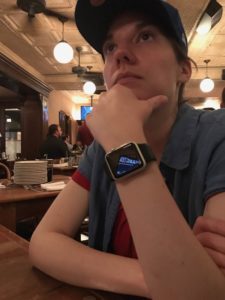 Game seven was an emotional roller coaster. I was on the edge of my seat when we goofed in the seventh inning and let them tie the score. That was the moment I realized how invested I was in this, not exactly as a Cubs fan (having only seen two and a half games so far), but as a Chicagoan, surrounded by other Chicagoans who had all literally been waiting their whole lives for this moment.

The rain delay before the tenth inning was a blessing and a curse. My girlfriend and I moved into the bar where the sound was up on the TVs to watch the final inning. The sound the bar made when Rizzo caught the ball that ended the game was incredible: one part elation, one part celebration, and one part surprise that we’d really done it. We’d won the World Series.

They poured prosecco and we toasted and cheered and hugged and kissed. Outside, everyone honked their horns, yelled, and sang “Go Cubs, go! Hey Chicago, what do you say? The Cubs are gonna win today!”

For a moment, the whole city was united and celebrating an achievement 108 years in the making.

I will probably never care that much about the outcome of a sporting event again, but I am so glad I was there and fully present when the curse was broken. 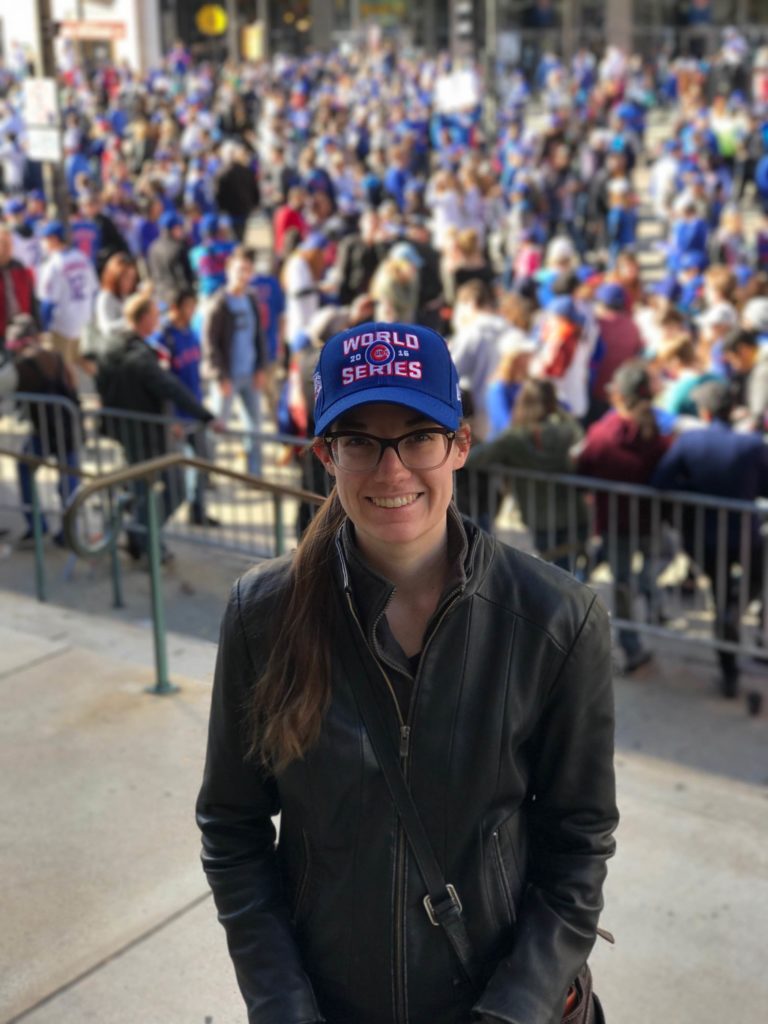 Celebrating the end of the curse

Millions gathered for the Cubs parade

This entry was posted in Sports and tagged cubs, world series. Bookmark the permalink.