Diaries of Parenting a Kitten: Vol 3

Posted on August 10, 2018 by Dani Alcorn
Agent Thunderpuff and Delilah continue to bond. Huge steps are being made. They shared a lap for 20 whole seconds! 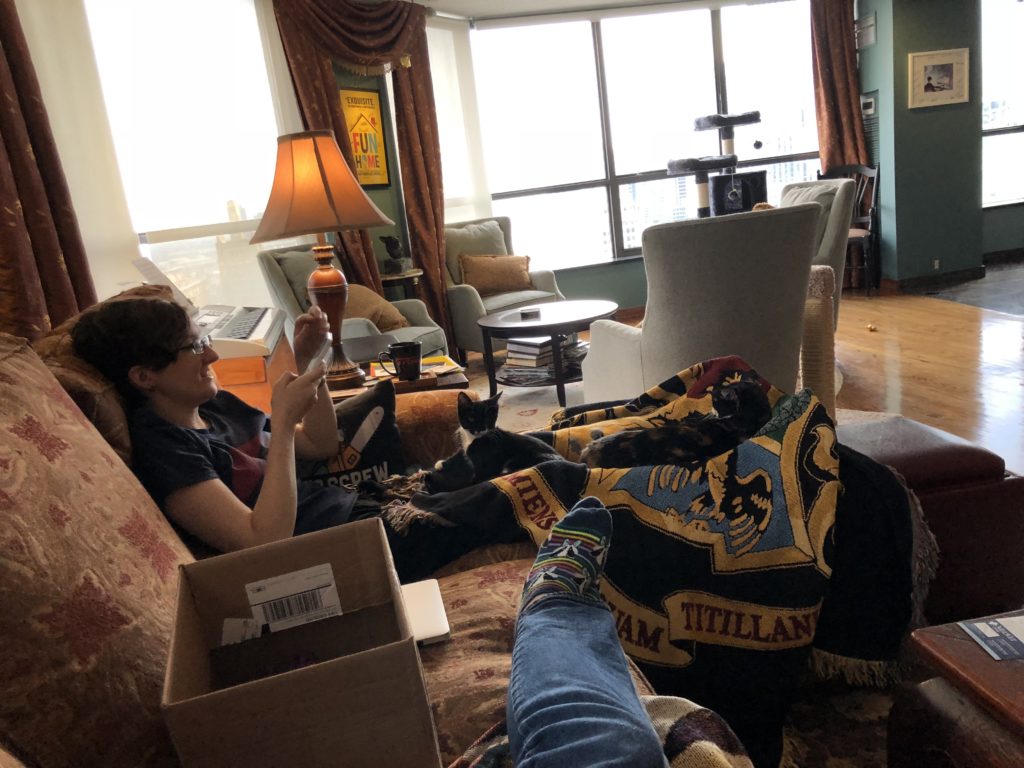 Delilah really wishes he’d get the hint about naptime though. 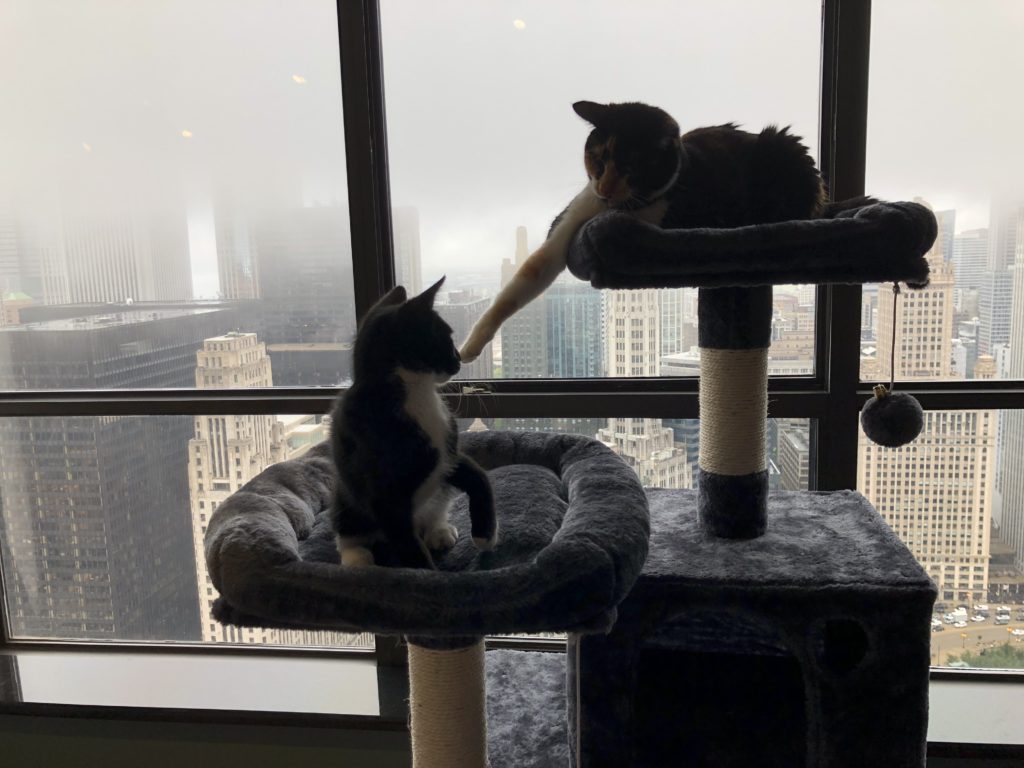 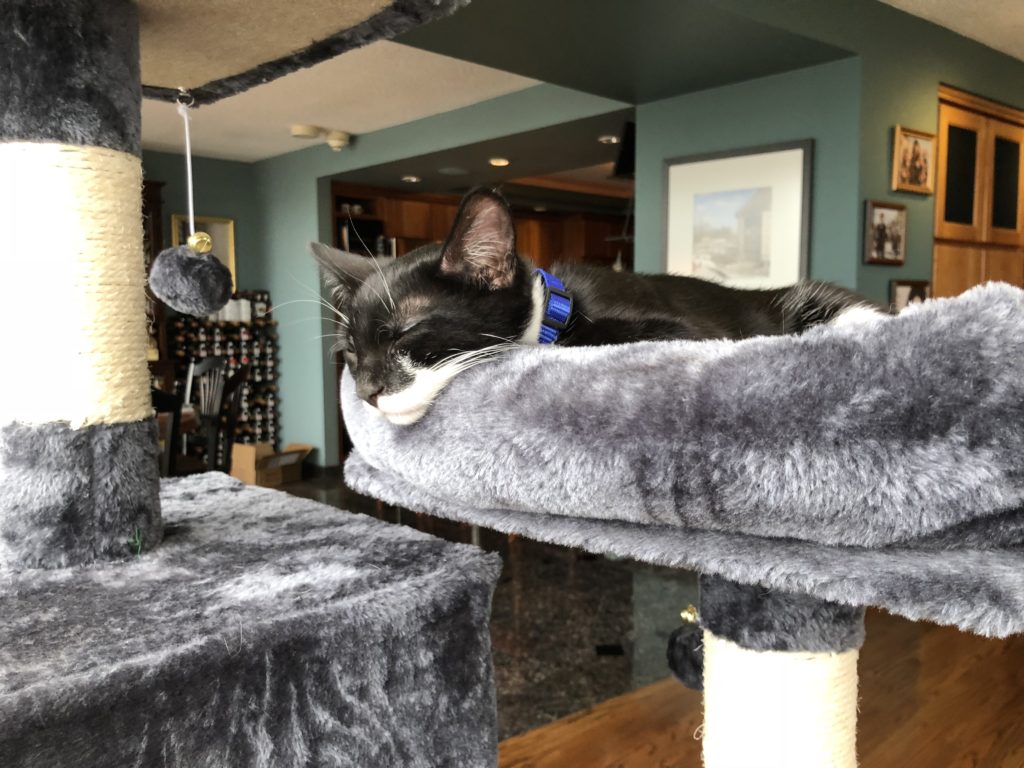 I would have given less than 50% odds the expensive cat tree we bought would ever get used, but it’s actually quite popular. Though Trish remains Delilah’s favorite climbing platform. 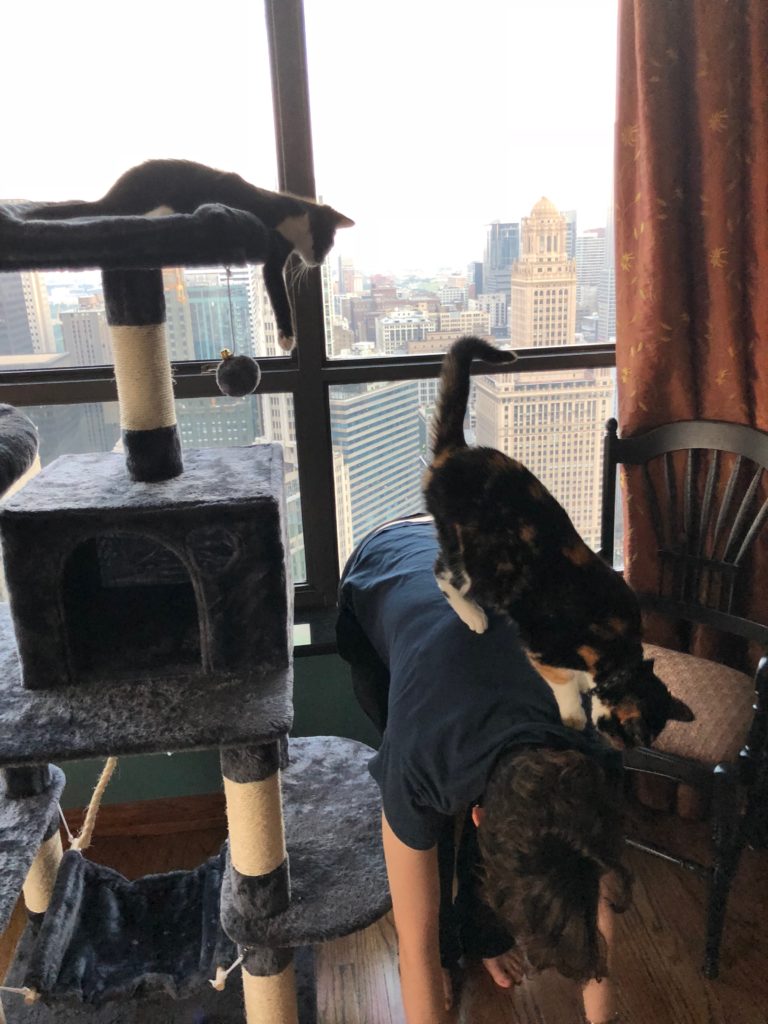 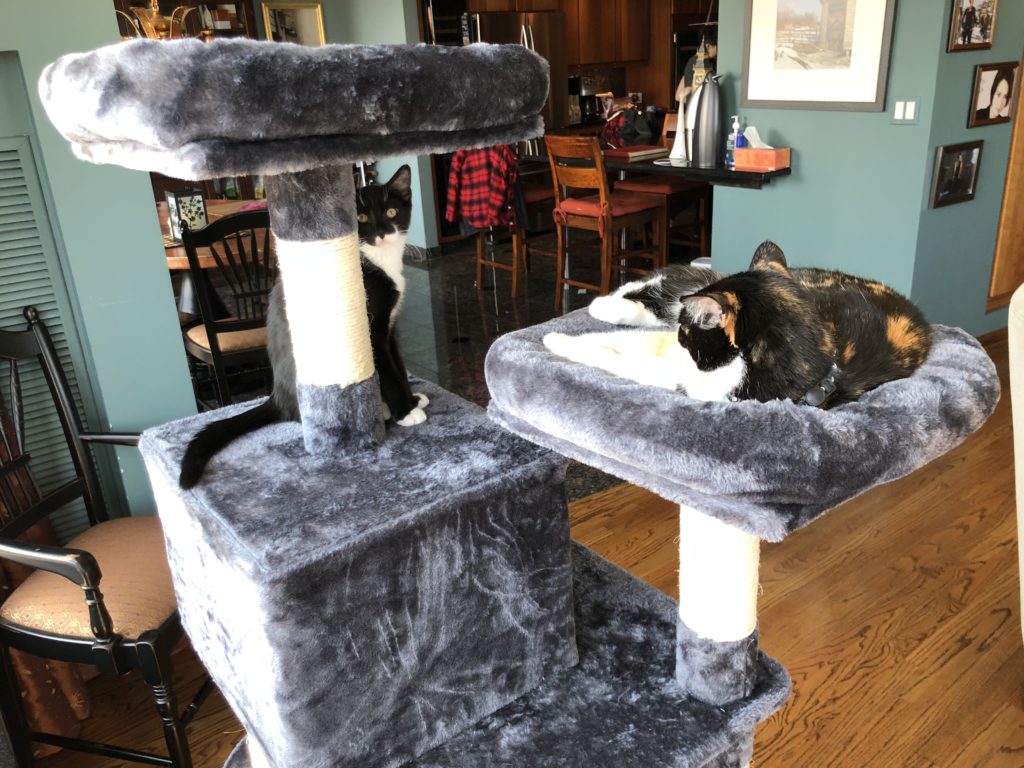 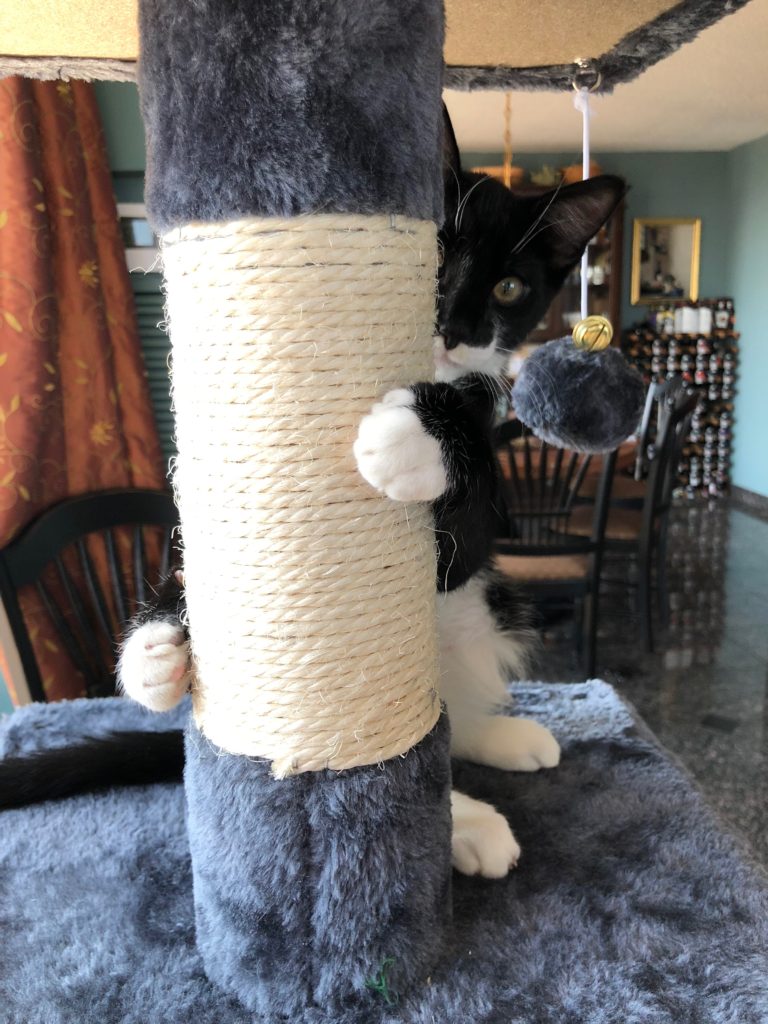 He continues to be a silly goofball with feet he needs to grow into. 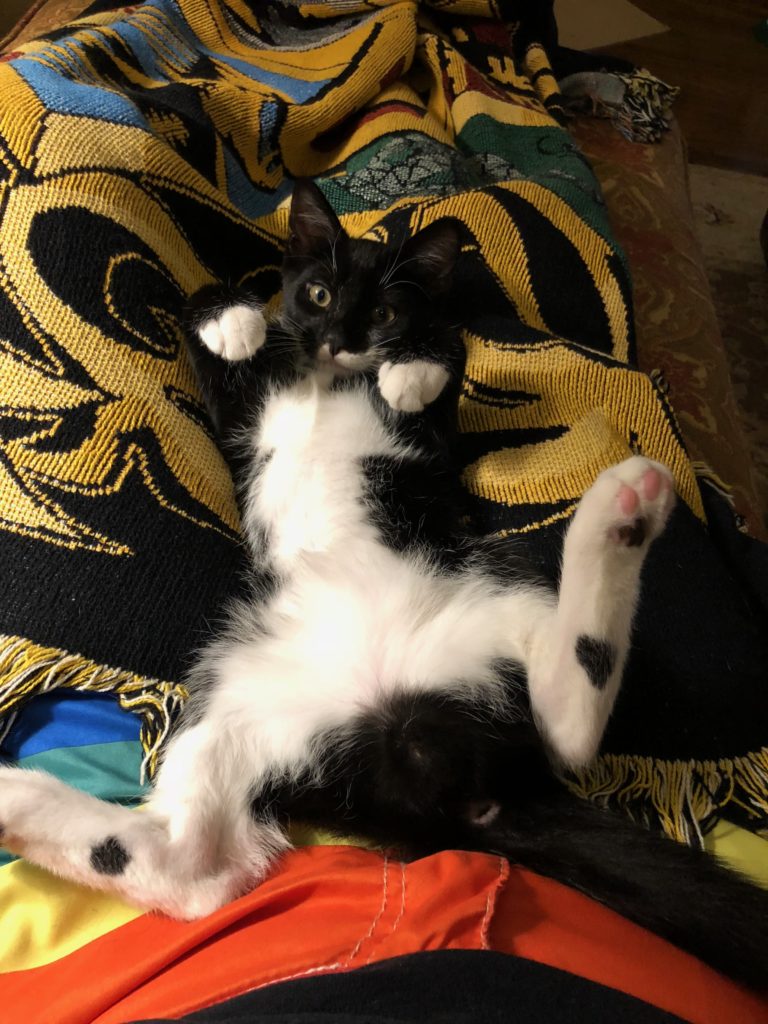 He’s also an active little guy, and he’s teething. Unfortunately, we’re the favorite chew toy at the moment. We’ve started keeping a box full of toys on the couch we can throw to distract him. But sometimes the box is the best toy. 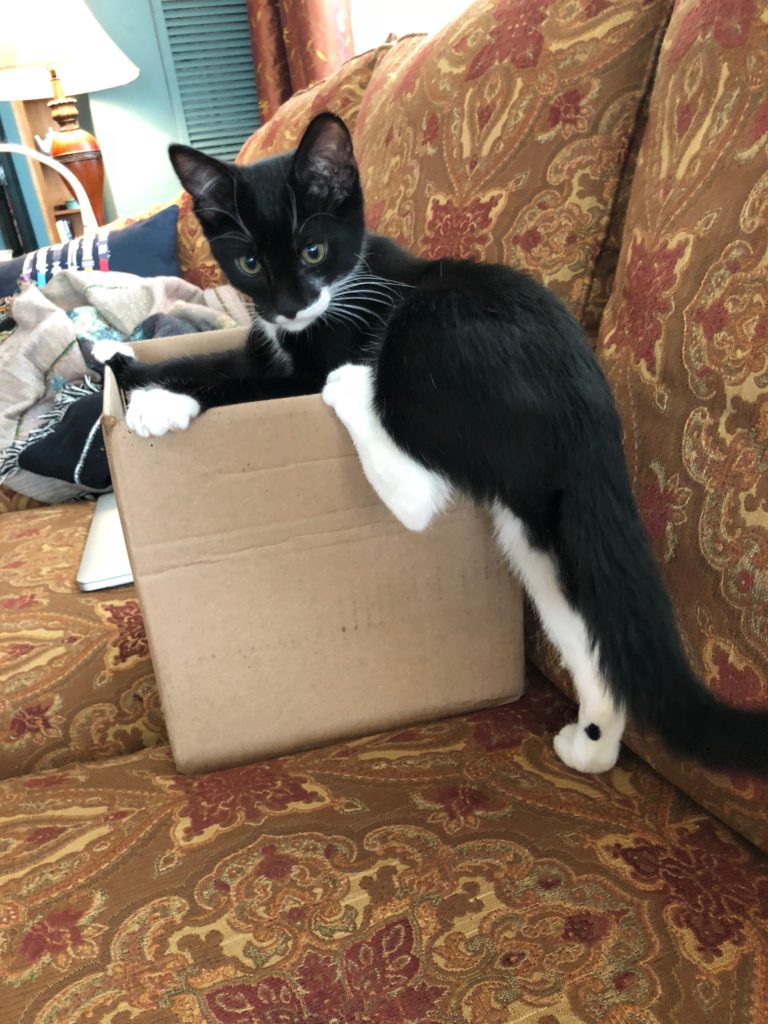 Despite it being part of his namesake, he wasn’t too sure about the thunder that rolled through. But raindrops are FASCINATING. I realize, as a former California cat, he probably hasn’t seen much rain. 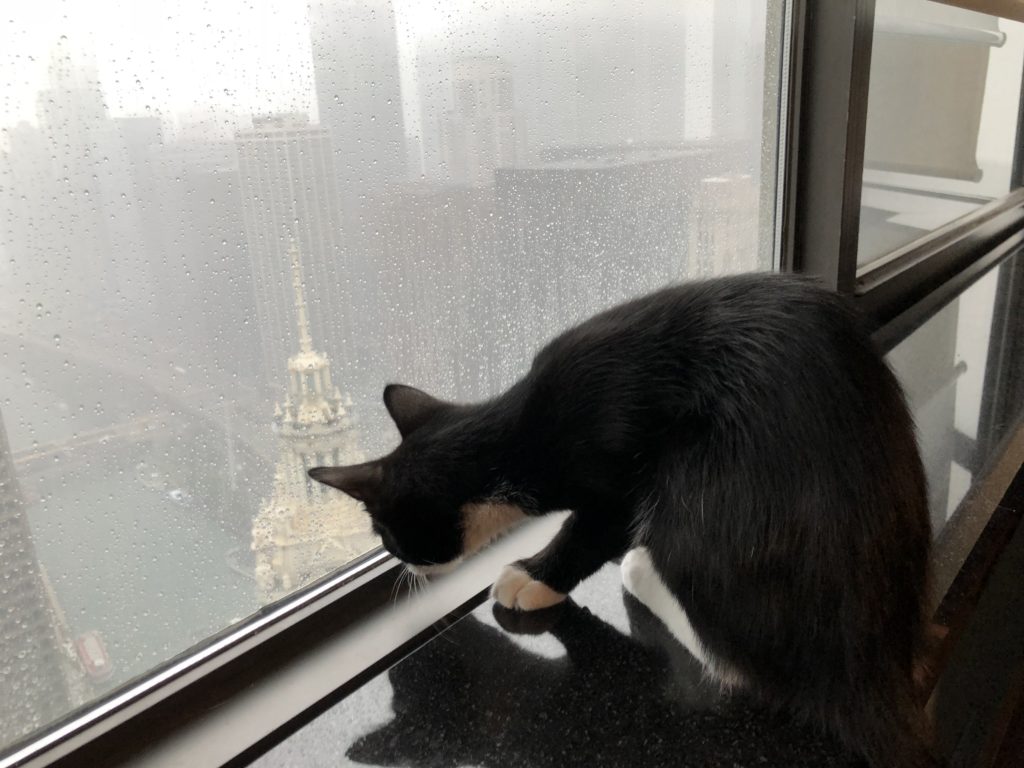 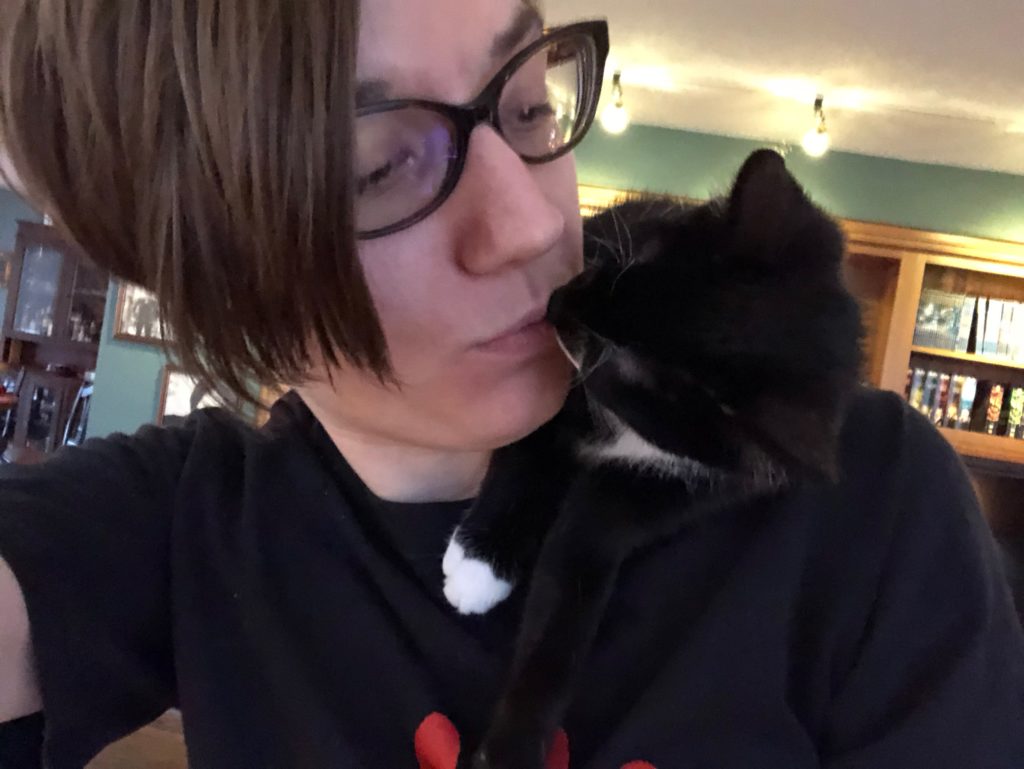 And I continue to receive much supervision during work hours. 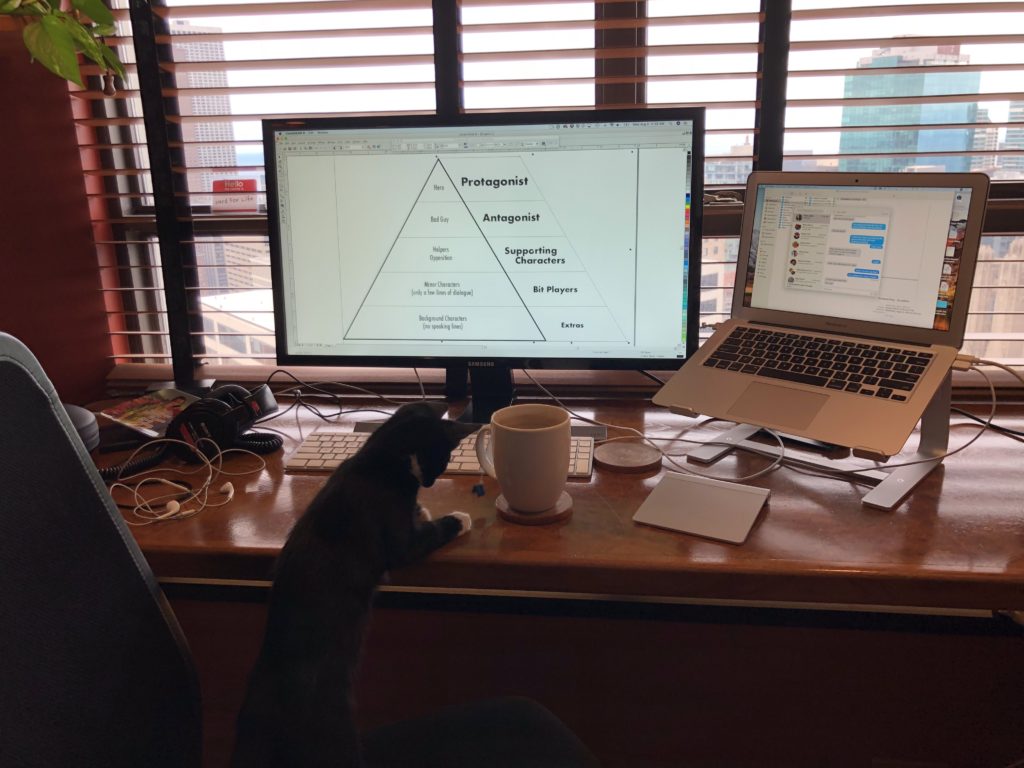 He’s also very “helpful” around the house. He participates in all sorts of chores. 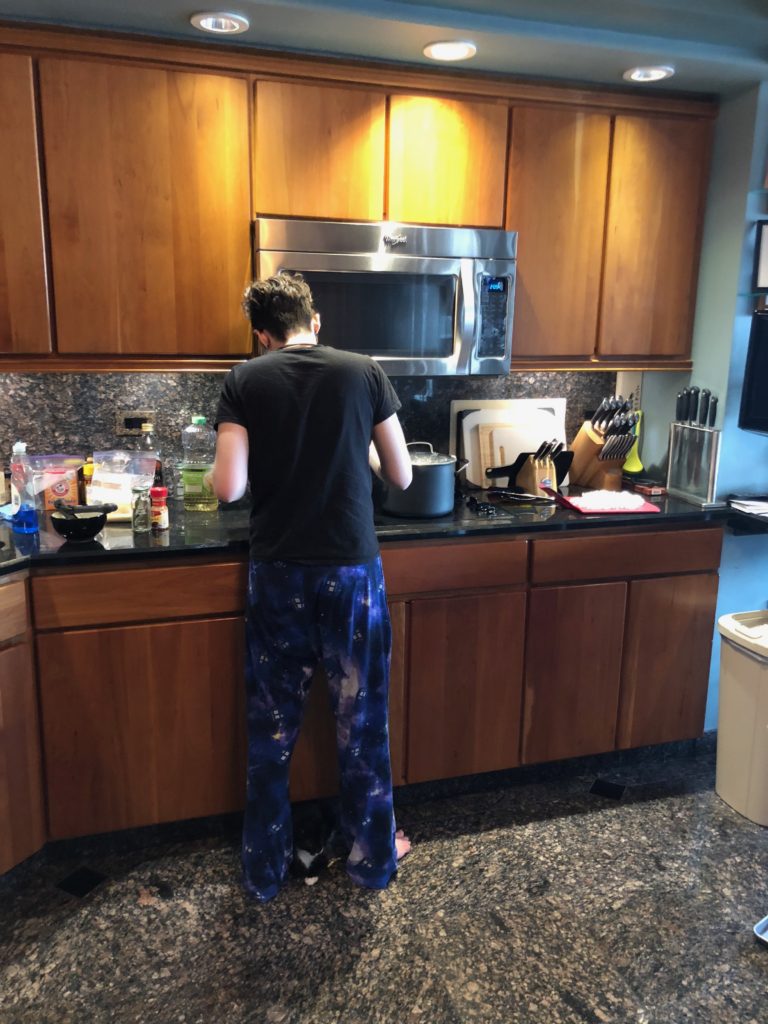 And he has also developed a fondness for participating in other daily rituals. Like restful weekend mornings and family dinner time. 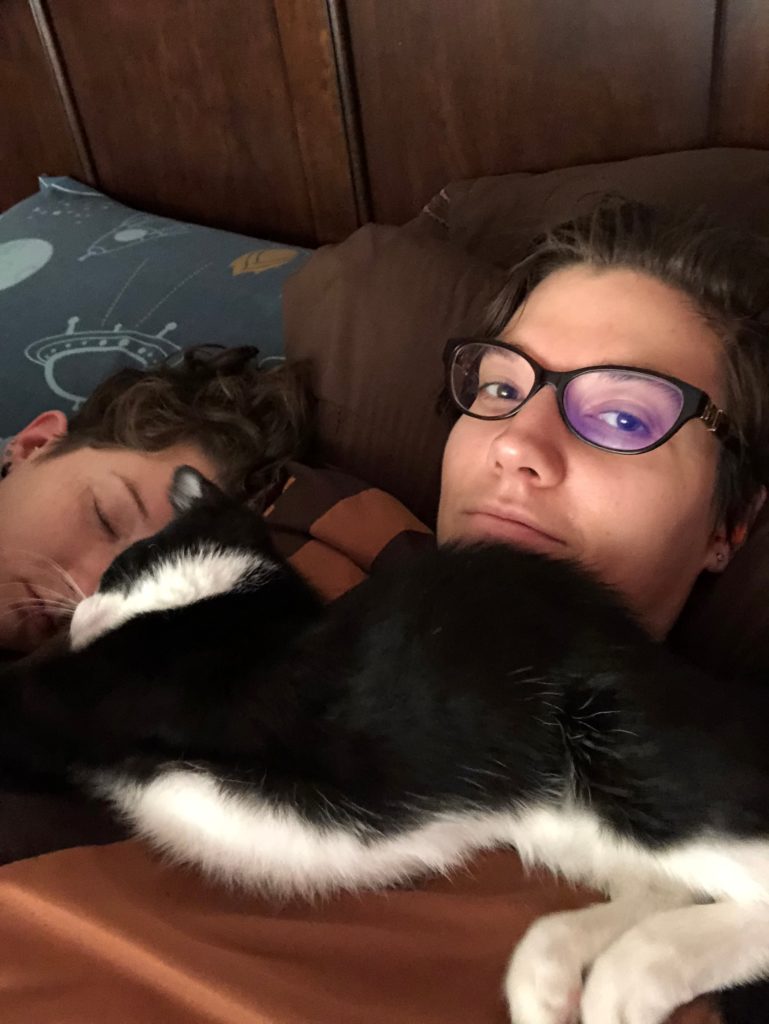 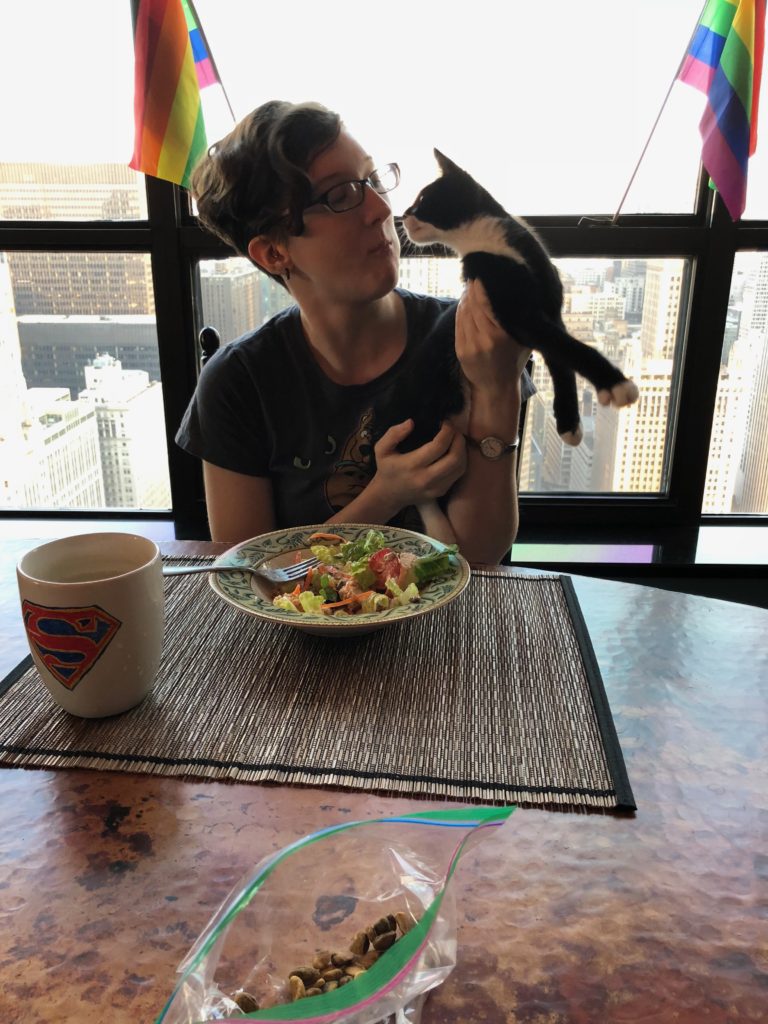 Speaking of family, Steve and Linda Alcorn have been at it again. On a rainy day, a stray cat in their neighborhood deposited a two-week-old kitten on their front porch. For anyone keeping track, that means they’ve found three kittens in two months.

1. Some higher power REALLY wants them to have a kitten and they’re just not getting the hint.
2. They’re being karmically punished for buying purebred cats. And if they’re paying off their debt by the pound they have at least one more kitten to go!
At any rate, they took the poor thing in, took her to the vet, and started round the clock feedings. 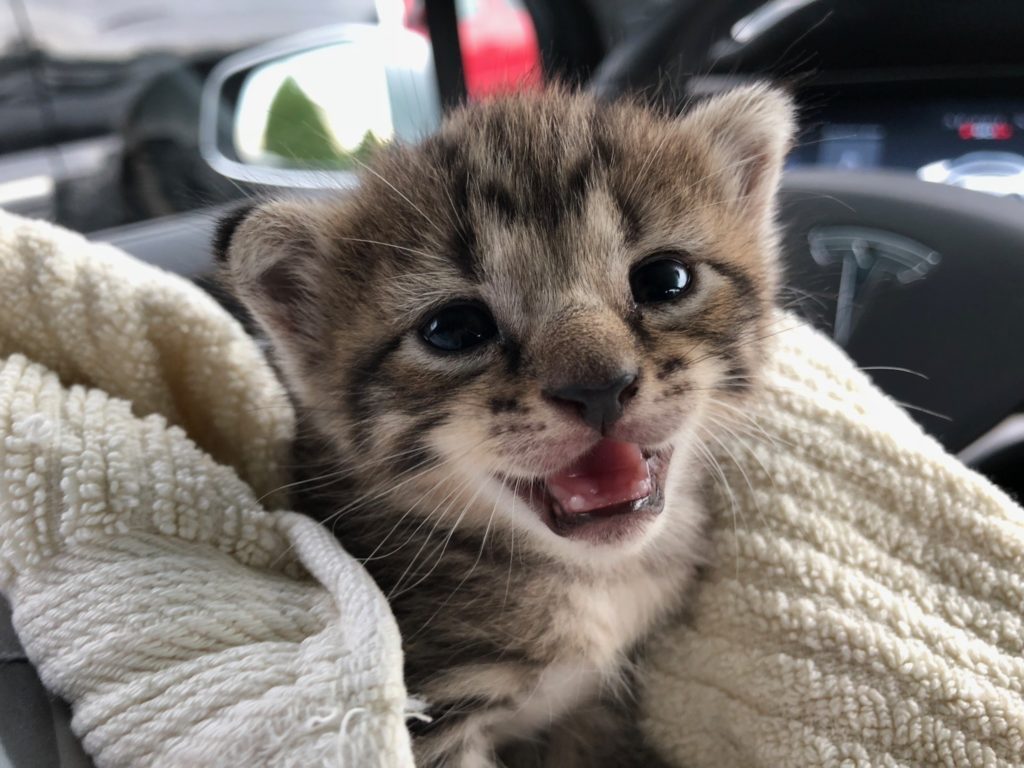 It was touch and go for a while because she didn’t take to the bottle AT ALL but, eventually, they started getting some human baby food into her and figured out she’d nurse if they put the bottle inside a sock so it felt fluffy. 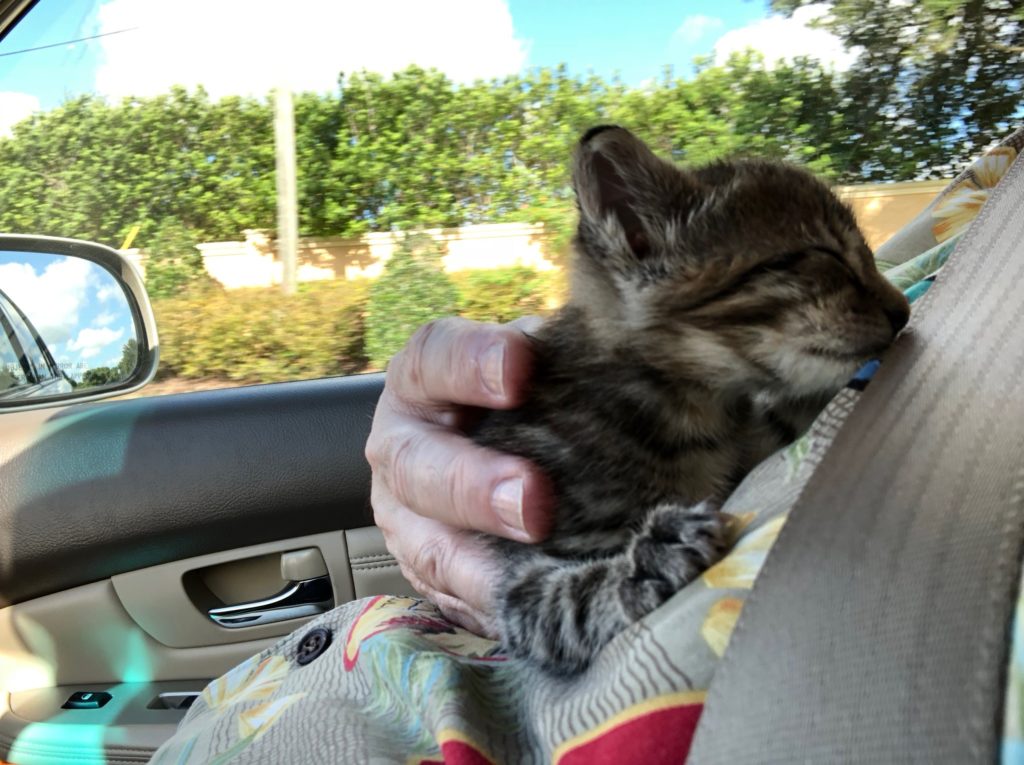 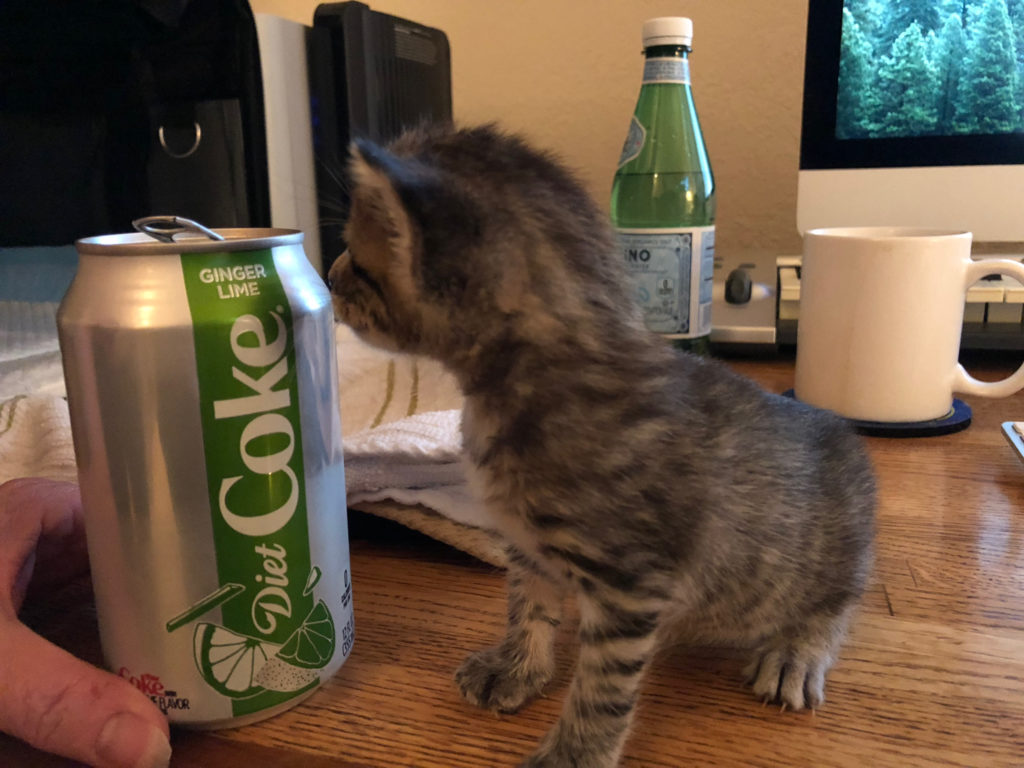 It’s even more dramatic when you compare her to the enormous Maine Coons. It’s like they’re two different species… she’s literally still smaller than their heads. 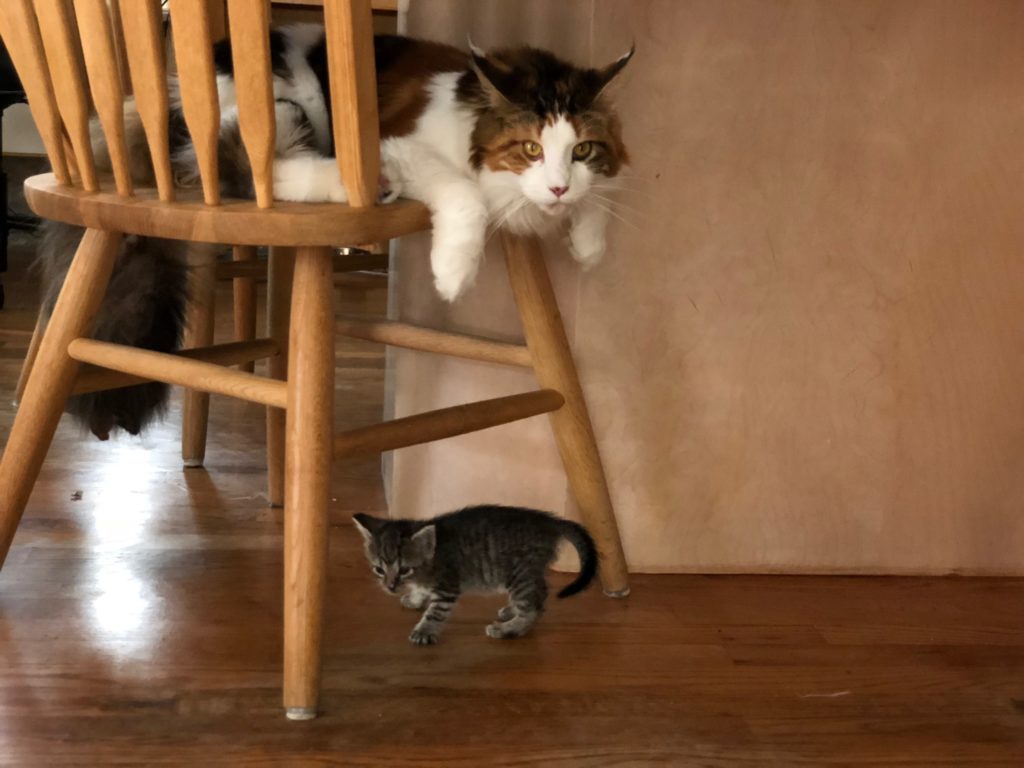 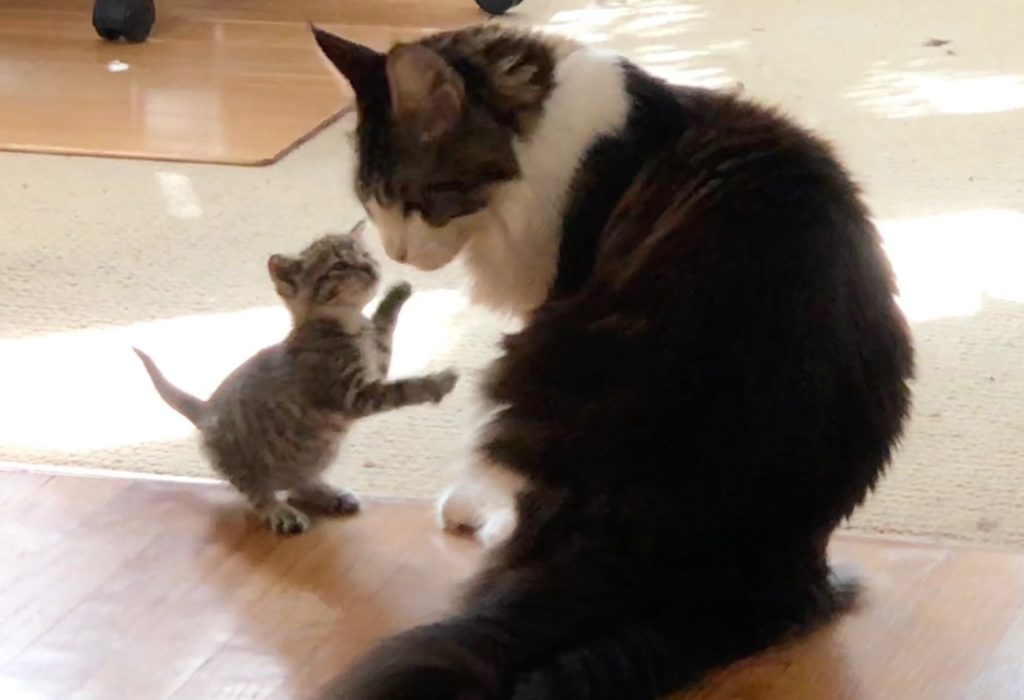 My parents swore up one side and down the other they were NOT keeping her. Yeah. That lasted about two weeks.

So, meet the newest Alcorn, Chessie. 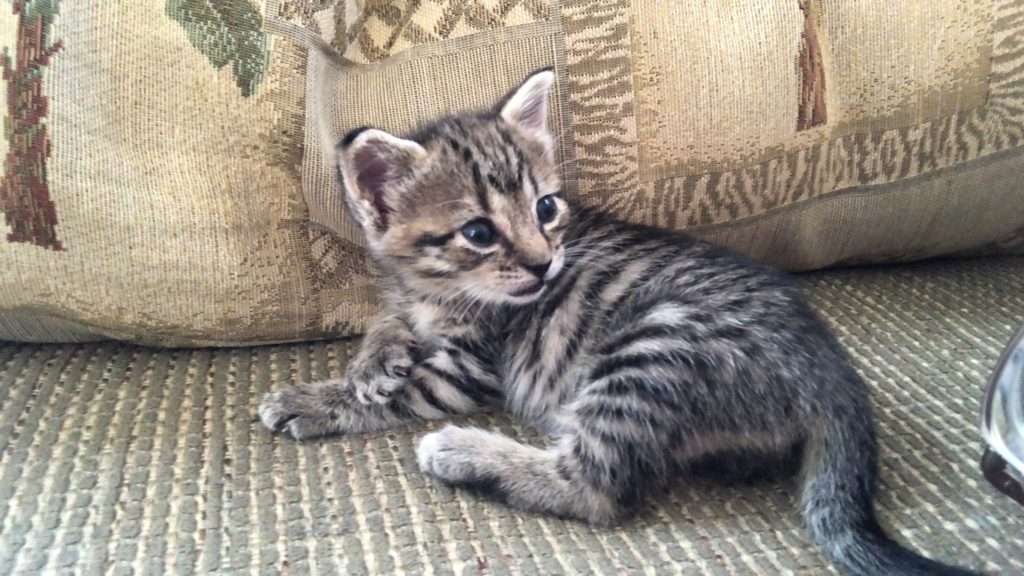 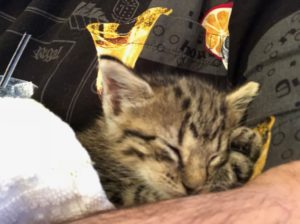 No matter how big she gets, she’ll always be half the size of her “siblings” 🙂

This entry was posted in Agent Thunderpuff, Cats, Chessie. Bookmark the permalink.